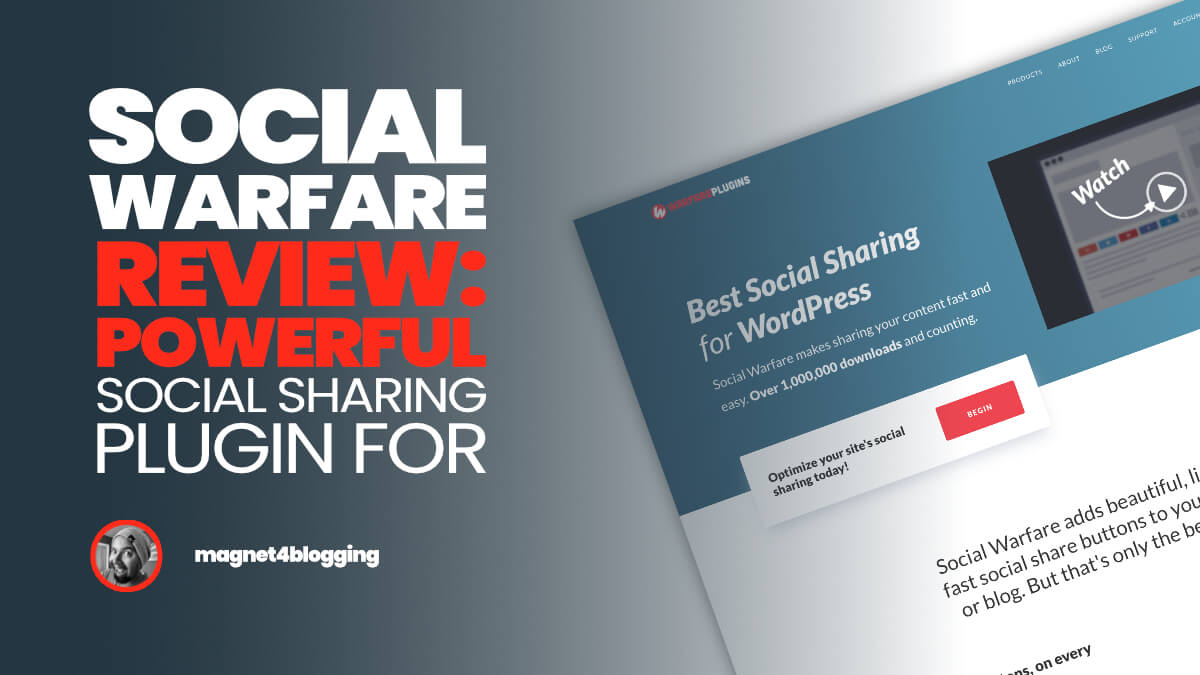 Here is my personal and unbiased review of the Social Warfare social sharing plugin for WordPress!

Sometime during 2015, I stumbled upon a premium plugin called Social Warfare. I remember seeing and hearing a lot of hype about it at the time, and naturally, I had to check it out for myself.

If you're a long-time reader of Magnet4Blogging, you may vaguely remember that I used to use the Easy Social Sharing Buttons plugin on this site.

If you can't remember, it really doesn't matter. But that plugin was extraordinary. The button styles were just beautiful. I was drawn to Social Warfare at the time because it had similar features and characteristics as the Easy Social Sharing Buttons plugin.

So, I transitioned to Social Warfare and for the first three year, this was one of the best premium plugins I every bought for my blog.

For a while, the Social Warfare plugin was the only social sharing plugin I wanted to recommend to my readers. It was truly an awesome plugin.

So, let's fast forward to today in 2021. These days, there are quite a few options to choose from when it comes to social sharing plugins. There is a range of both free and premium plugins.

Just to name a few, you have - Sumo Share, Mashshare, WP social, Novashare, Monarch, and many more. And so the question is, is Social Warfare really worth the time or even money?

Note: Before I continue, I need to inform you that I no longer use Social Warfare. You might have guessed that already. I now use a plugin called Social Snap. I'll explain why and how shortly.

What is Social Warfare?

If you haven't already guessed, Social Warfare is a lightweight, fast-loading, feature-packed social sharing plugin for WordPress. It works on hosted WordPress sites only, not WordPress.com sites.

All three of these Gentlemen have extensive background knowledge and experience in content creation, product design, development, and marketing.

When I first discovered Social Warfare, there wasn't a free version of the plugin available. It was paid-for only.

Of course, now there is a free version available from the WordPress repository, which you can download here. As you might have guessed, the free version is a basic plugin stripped of advanced features.

The free version of Social Warfare has over 60,000 downloads to date.

The premium version is where Social Warfare really shines. There are some amazing features designed to help you increase shares, engagement, and drive traffic! We'll dive more into the advanced features shortly.

Who can use this plugin?

Anyone with a WordPress blog or website can use Social Warfare. Whether you manage a blog or an eCommerce website. You also don't need to be a developer or WordPress specialist to install this plugin and configure it the way you want. All of the options are easy to use too.

Why use Social Warfare?

Why even bother with Social Warfare if you're happy with the plugin you're currently using?

Well, if you're happy with what you are using on your blog, you would not be reading this Social Warfare review.

And yes, there also may be many other free and premium plugins you can use. I use Social Snap and not Social Warfare.

But if you're thinking of sticking with a free plugin, on the other hand, that's also perfectly fine, as long as you don't need the additional customization options or the frequent updates and feature upgrades of a premium product. Or the premium support.

Features of the Social Warfare Plugin

Let's break this down:

Social Warfare, the free version, already comes with some pretty cool features. These include the following -

Social Warfare, the Pro add-on version comes with everything the free version has, plus the following additions -

Now, I'm not going to dive into each feature in huge detail. But we'll at least look at a few of the key features of Social Warfare.

With Social Warfare Pro, you can customize your social sharing buttons just the way you want them to look.

According to the SW website, there are over 5,000 potential style combinations to work using Visual Options.

In addition to styling, you can position your buttons almost anywhere you want on your site/page, simply by selecting the placement options available, or manually placing the buttons into your posts or pages yourself using shortcodes.

I love this feature in SW. You can add a 'Click-to-tweet' custom message anywhere in your content. With the pro-add-ons, you can customize these even further with your own CSS to match your blog's branding.

Another one of my favorite features in the Pro version is the Hover to Pin button. This option lets you pin images straight to your Pinterest boards, and as we all know, Pinterest can be a great source for blog traffic.

One of the coolest features, I think in Social Warfare is the Popular Posts widget.

You can drop this widget straight into your blog's sidebar or footer area to display your most popular posts by the total number of social shares.

You can also choose a specific network to base your post's popularity. See image below.

So, if your blog is missing a popular posts widget, or you're using an external plugin for this - It's included in Social Warfare Pro.

Those are just some of my favorite features of Social Warfare free and pro version. If you want to compare Social Warfare Free and Pro together, click here.

How much is Social Warfare Pro?

Again, just to remind you that there's a free version of this plugin available to download, as I mentioned above.

The Pro version of the plugin is priced as below. These prices are correct at the time of updating this review in February of 2021 -

Single Site License - If you wish to purchase the Pro Add-ons to gain access to the extra features, support, and updates, Social Warfare Premium is very affordable at just $29 per year for a single site license.

Five Sites License - If you want to use Social Warfare Pro on up to 5 sites, it will cost you $89 per year.

Ten Sites License - This will set you back $139 per year.

Unlimited access - Unlimted access means you can use Social Warfare on as many personal, and I'd imagine, client sites as you like. You will have to pay $349 per year.

What's the pros and cons?

Please note that the pros and cons are based on my own personal experience with Social Warfare.

And the verdict is?

Yes, the Social Warfare plugin with the Pro add-ons ticks all the boxes that other social sharing plugins have failed to do in the past. That much I can agree on.

With SW, you get a plugin with built-in social optimization tools, click-to-tweet feature, Twitter cards, Twitter counts, and so on; not all social sharing tools out there really provide this much value affordable price.

So, why did I stop using Social Warfare Pro and move over to Social Snap?

Why I stopped using Social Warfare Pro on Magnet4Blogging

Note: I still use Social Warfare, the free version, on other websites that I have.

There was a time when each and every single updated version of Social Warfare would crash my website. This happened too many times and eventually, I had to look for an alternative plugin and found Social Snap.

It all started back a few years ago when Warfare Plugins released version 3.0 of Social Warfare.

This version unknowingly came with a ton of bugs, which caused many WordPress websites using both Social Warfare free and pro to crash upon updating to the latest updated version.

This only happened a few times, but for me, the last time was enough to make me not want to use Social Warfare.

The product is still an amazing plugin in my mind, and I gave Social Warfare the benefit of the doubt the first time it happened.

However, the way the company conducted the release of update 3.0, which was broken and clearly not ready for a live release just astounded me.

And by the way, this isn't just my opinion. You can read some reviews provided on their Facebook page here at the time.

Sadly, the plugin now only has an average score of 2.6 out of 5 from 30 customer reviews.

I know all of the above doesn't sound great, but I'm all about being transparent with you as my reader. I have to be honest here.

And don't get me wrong, I still love Social Warfare and wish them all the luck in the future. I hope they have come back from this situation and are now a better company.

And, I have to give credit where it is due because the Social Warfare team did all they could to look after their paying customers the best they could and went about to fix those bugs as quickly as possible.

They took a lot of criticism, but their response has always been professional, tactful, and empatheric.

That said, the whole process took several weeks to fix, and even after that, things weren't running properly with the plugin, which is why I decided to remove Social Warfare on my site.

For the most part, yes, I absolutely do. My experience was well over three years ago. I still use the free version of the plugin on several small niche sites and my eCommerce site, and it works just fine.

Give Social Warfare a try for yourself and make up your own mind whether you think it's great or not.

Download the free stripped-down version of the plugin here, and click the button below to learn more about the Pro Add-ons.

Check out my other reviews

Affiliate Disclaimer: This post contains affiliate links to Social Warfare. This means if you click and make a purchase of Social Warfare Pro, I will be paid a small commission, at no additional cost to you. Thanks for your continued support.

Get fresh content from Magnet4Blogging delivered straight to your inbox, spam free! Or follow us on social media.

Plan to make 2021 your best blogging year yet! 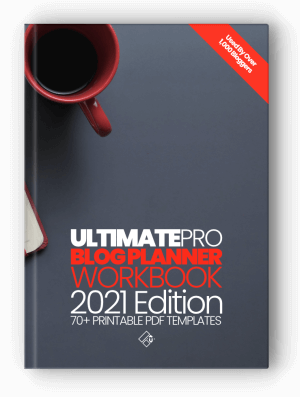 Learn More
Power Guides
How To Create A WordPress Blog From ScratchThe Complete Beginners Guide To Building An Email List10 Powerful Marketing Tactics To Grow Your Blog TrafficHow To Promote Your Blog On InstagramBest SEO Tools For Bloggers And Marketers For 2021How To Get Your Blog Noticed Without Google Or SEOBest Affiliate Programs For BloggersHow To Make $1,000+ Per Month From Your Blogview more posts
Top Reviews
SiteGround WordPress Hosting Review: 5 Years Of Flawless ServiceBluehost WP Pro Hosting Review: Is It Really Worthy It?Thrive Theme Builder Review: A New Simple Way To Build WordPress SitesThrive Leads Review: The Complete List Building Toolkit For WordPressThrive Suite Review: Conversion Tools For Growing Your BlogSocial Snap Review: The New Kings Of Social Sharing PluginsFusebox Podcast Player Review: Tools To Grow Your PodcastPayhip: The Perfect Platform For Selling Your Digital Products