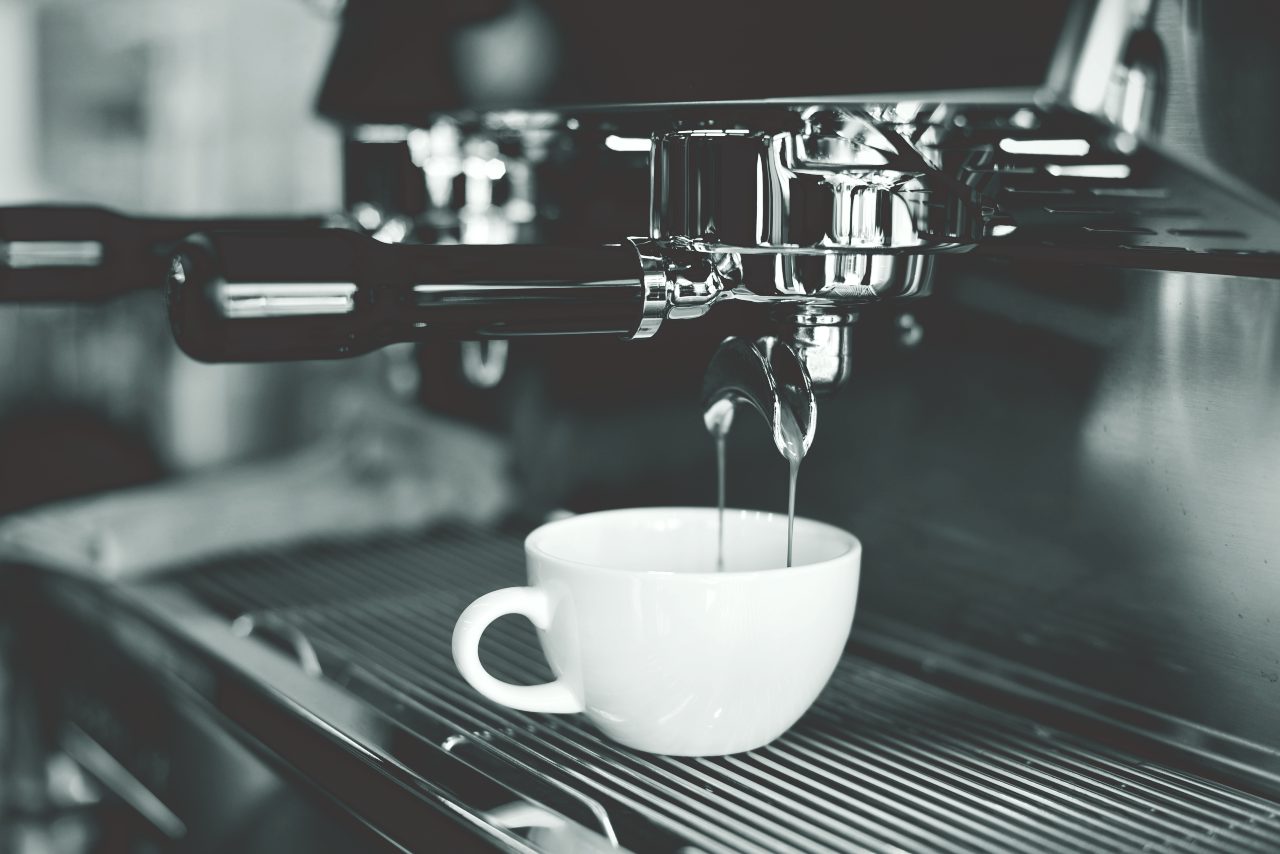 Since 1998, there has been an ongoing battle between Google on one side and SEOs eager for fast results - on the other.

If we go back in history, we’ll find out that Google started from Backrub research project by Larry Page and Sergey Brin in 1996.

Back in the day, search engines measured the relevance of search results by the number of times certain keywords appeared in the text. Page and Brin argued that in order to obtain results of higher quality, it would be better to rank pages based on the backlinks they receive from relevant high-authority pages.

That’s how PageRank algorithm was born.

Quality. That’s the main concept which has been determining Google’s direction ever since it has been founded and that’s the concept we always have to keep in mind when trying to understand reasons why Google is doing certain things.

PageRank was the first algorithm used by Google, but now it’s just one among more than 200 factors Google takes into consideration when ranking pages striving to deliver most relevant results which will satisfy users’ needs.

Modern-day Google does an exceptional job identifying what users are actually searching for, dealing with ambiguities, vague queries and peculiarities of natural language which machines find rather challenging to process.

Let’s take a look at two queries which use similar words, but ask for different information and see how Google can handle those.

The first one will be “Who was with Jennifer Aniston in Friends” which aims to find out the cast for the famous TV show. The task for Google here will be to identify “Friends” as TV series, and not one’s life buddies.

Let’s see what the result is. 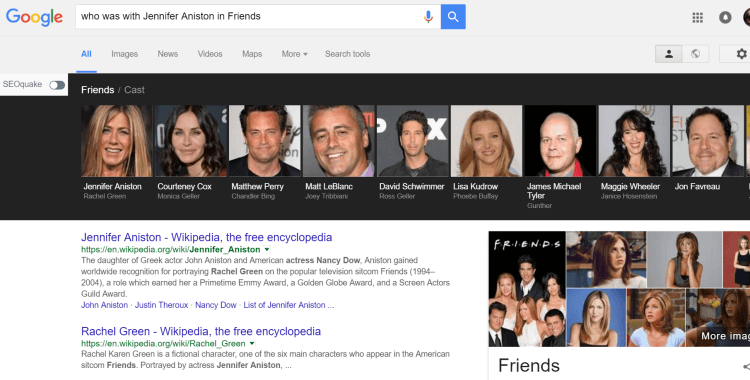 Nice! Exactly what we asked for. If you think about it, it’s pretty logical as Jennifer Aniston’s name appears really often in association with the TV-show.

Take a look at the no. 1 result. That’s amazing how Google noticed a subtle difference in the queries and delivered 100% relevant results.

That’s the difference that only a human can spot, correct? Well, not exactly.

This is Where the Magic Happens

Since 2015 Google has been massively using RankBrain, a machine learning AI system, which contributes to providing high-quality search results.

What makes RankBrain different from other algorithms used by Google? The key phrase here is a “machine learning system”.

Before RankBrain, Google engineers had to put a lot of data manually building intricate relationships between terms, phrases, and concepts so that the algorithm can “understand” subtle differences and provide relevant results.

Now, they feed a lot of data to RankBrain which learns the provided information and tries to predict new queries which this information might satisfy.

The original problem which RankBrain is called to resolve is that Google receives more than 3.5 billion searches a day and 15% of those searches have never been seen by the search engine before which creates certain difficulties in terms of how to handle those queries and which results to provide. And that is where RankBrain comes into play trying to make its best guess in order to refine search results which appear for the first time.

Greg Corrado, a senior research scientist at Google, explained the basic principle behind RankBrain as follows:

“If RankBrain sees a word or phrase it isn’t familiar with, the machine can make a guess as to what words or phrases might have a similar meaning and filter the result accordingly, making it more effective at handling never-before-seen search queries.”

In May 2016, Google’s CEO Sundar Pichai revealed that 20% of searches on the Android mobile app came from voice which means that queries become much more complex for search engines to handle as they have to deal with natural language. The number of voice search queries grow at humongous speeds doubling over the past year, it doubled in 2014 as well.

This means that Google will adapt to these changes and RankBrain will play a major role in dealing with natural-language queries.

Based on what we already know about RankBrain, how can we make our content more lovable for the new algorithm?

1) Sound natural. Natural language processing and dealing with “difficult” queries is what RankBrain was built for. Hence, it’s pretty logical to assume that RankBrain will reward content written in the language optimized for humans, not the machines.

Besides, this was confirmed by Google’s Gary Illyes himself:

The bottom line is that it’s probably better not to focus on RankBrain at all, but pay more attention to your audience instead, trying to satisfy their needs by delivering premium content which will be actionable and easy to process.

2) Make sure your posts are deep and meaningful. Make it super easy for your audience and algorithms to understand what problem your content is dealing with and how you can help to find the solution.

It’s better to create long-form content as it will help Google better identify the topic and the purpose of your piece of content as it uses something called co-occurrence.

Since RankBrain is built to deal with queries which have never been seen before, it depends highly on co-occurrence in order to deliver best results. Didit’s Steve Baldwin explains that co-occurrence is “the existence of words and phrases in query results not in the query executed by the user, but in related queries logged by the algorithm and mapped via word vectors”.

This makes it possible for RankBrain to return meaningful results for such obscure queries as “where is the apartment where TV show about 6 friends was shot”.

At first, the algorithm has to guess that the “TV show about 6 friends” is Friends and then it has to look for the actual building.

As we can see, it’s not a problem for the search engine which is incredible. 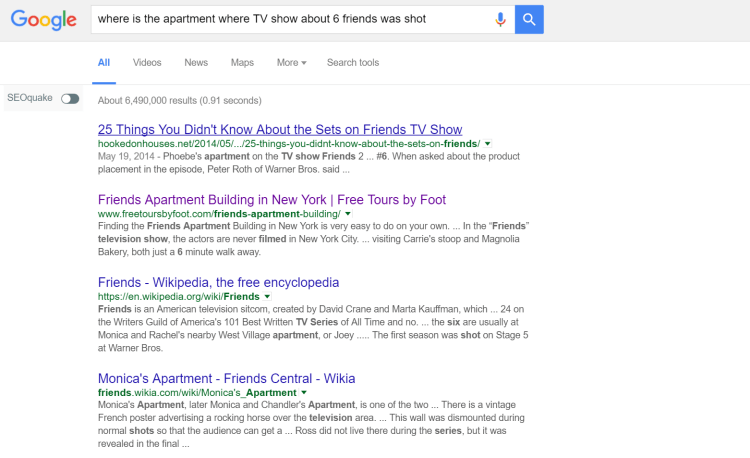 Long-form content allows us to use different synonyms as well as related terms and concepts naturally which increases your chances of being recognized by Google in the queries which are related to your topic, but not necessarily use the same words you did in your posts.

Make sure you use a lot of different descriptors that fit naturally in your content and don’t make it look like keyword stuffing.

3) Include mentions of case studies, research and high-authority sources. Including data from case studies or white papers, for example, will add value to your content and help Google to decide if your content is relevant for search results based on user intent.

When creating content, make sure that you show that you’ve done significant research, included relevant data to support your ideas and mentioned several high-authority sources to gain credibility.

If you ask Google about “average income in the uk 2016”, you’ll get quite a few results which include official reports and statistics related to salaries in the UK and not just people complaining about low salaries or difficulties they experience at the workplace.

Relevant content you can trust is a great signal for Google that you deserve higher rankings.

4) Earn natural links from high-authority resources in your niche. Let’s recall what Google’s Andrey Lipattsev said about the two most important ranking factors:

“I can tell you what they are. It is content. And it’s links pointing to your site”.

Everything is really interconnected in the way Google performs its searches. Optimizing for one ranking factor, you’ll inevitably hit the other ones. Discussing RankBrain optimization we were talking mostly about how to tweak our content which is a linking factor by itself.

In 2016, links pointing to your site are still playing a major role for your positions. Should you go ahead and buy 2000 links from a shady link farm? Don’t even think about it! It’s all about quality, remember? If you do that, you’ll be hit by a penalty in no time and it’s hard to recover, really hard.

That’s why it is much better to focus on what? Right! Content, again!

Creating awesome content is not enough. To earn links and traffic to your blog, you have to promote it a lot. You can try Brian Dean’s good old Skyscraper technique for creating and promoting your content, it still works! Why? Because it’s focused on quality which Google loves!

To sum up RankBrain optimization, here’s what you should do:

With RankBrain, we’re entering the era of SEO which relies on providing quality rather than black-hat techniques aiming to game the system. The advice for bloggers, marketers and everyone who wants to rank higher would be to become better every day and you’ll be rewarded.

Let me know your thoughts on RankBrain. What are you doing to create and provide better quality content RankBrain will love? Leave me a comment below.

Chris is a SEM specialist at Chicago SEO Services. He loves exploring the world of search engines and share his findings with others. Make sure to read his blog to get more actionable tips, advice and insights on how you can make your site awesome. 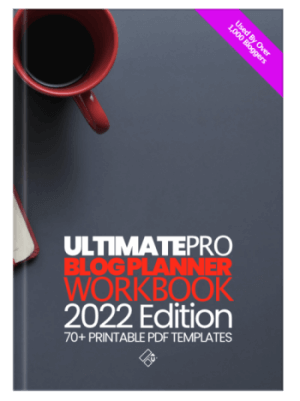 Learn More
Power Guides
How To Create A WordPress Blog From ScratchThe Complete Beginners Guide To Building An Email List10 Powerful Marketing Tactics To Grow Your Blog TrafficHow To Promote Your Blog On InstagramBest SEO Tools For Bloggers And Marketers For 2021How To Get Your Blog Noticed Without Google Or SEOBest Affiliate Programs For BloggersHow To Make $1,000+ Per Month From Your Blogview more posts
Top Reviews
SiteGround WordPress Hosting Review: 5 Years Of Flawless ServiceBluehost WP Pro Hosting Review: Is It Really Worthy It?Thrive Theme Builder Review: A New Simple Way To Build WordPress SitesThrive Leads Review: The Complete List Building Toolkit For WordPressThrive Suite Review: Conversion Tools For Growing Your BlogSocial Snap Review: The New Kings Of Social Sharing PluginsFusebox Podcast Player Review: Tools To Grow Your PodcastPayhip: The Perfect Platform For Selling Your Digital Products
[thrive_leads id='142973']
[thrive_leads id='142973']
We use cookies on our website to give you the most relevant experience by remembering your preferences and repeat visits. By clicking “Accept”, you consent to the use of ALL the cookies.
Do not sell my personal information.
Cookie SettingsAccept
Manage consent

This website uses cookies to improve your experience while you navigate through the website. Out of these, the cookies that are categorized as necessary are stored on your browser as they are essential for the working of basic functionalities of the website. We also use third-party cookies that help us analyze and understand how you use this website. These cookies will be stored in your browser only with your consent. You also have the option to opt-out of these cookies. But opting out of some of these cookies may affect your browsing experience.
Necessary Always Enabled
Necessary cookies are absolutely essential for the website to function properly. These cookies ensure basic functionalities and security features of the website, anonymously.
Functional
Functional cookies help to perform certain functionalities like sharing the content of the website on social media platforms, collect feedbacks, and other third-party features.
Performance
Performance cookies are used to understand and analyze the key performance indexes of the website which helps in delivering a better user experience for the visitors.
Analytics
Analytical cookies are used to understand how visitors interact with the website. These cookies help provide information on metrics the number of visitors, bounce rate, traffic source, etc.
Advertisement
Advertisement cookies are used to provide visitors with relevant ads and marketing campaigns. These cookies track visitors across websites and collect information to provide customized ads.
Others
Other uncategorized cookies are those that are being analyzed and have not been classified into a category as yet.
SAVE & ACCEPT
Share via
Facebook
Twitter
LinkedIn
Mix
Pinterest
Tumblr
Skype
Buffer
Pocket
VKontakte
Parler
Xing
Reddit
Flipboard
MySpace
Delicious
Amazon
Digg
Evernote
Blogger
LiveJournal
Baidu
MeWe
NewsVine
Yummly
Yahoo
WhatsApp
Viber
SMS
Telegram
Facebook Messenger
Like
Email
Print
Copy Link
Copy link
CopyCopied